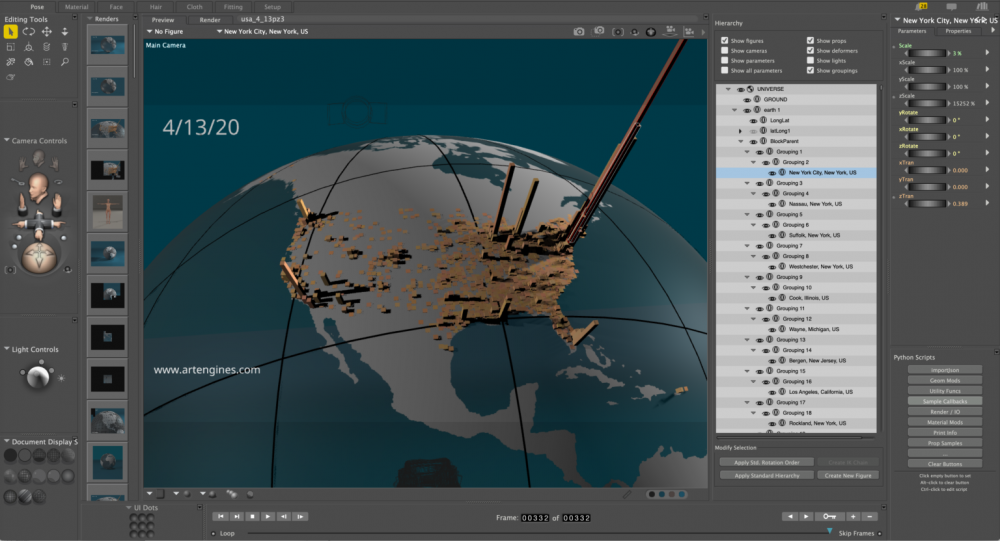 For this visualization I used the confirmed-case statistical time-series that is updated daily by a team at Johns Hopkins University Center for Systems Science and Engineering.
This shows the progression of confirmed Covid-19 cases in the U.S. through April 11. The 1,200 top locations are shown.

The repository of data can be found on GitHub.

I cloned the data repository into a folder locally:

I knew I would need to use Python to pull out the data I wanted from the .csv files that the repo contained. So I used pyenv and made sure that I had Python 3 installed and that the python pandas module was also installed. I would use Poser’s python later, but it doesn’t have the modules installed that I would need and on the Mac it is still Python 2.7.1.

Step 3. Decide on data format to read into Poser

The goal here was to convert the data I needed to a .json file in a format I could easily import into Poser’s python interpreter so that I could use it to create objects inside Poser.

I decided on this JSON file format to include name, longitude, latitude, and values:

I won't put all the python code here but the important calls were:

Step 4. Build a base Poser file with an Earth.

I built a base file in Poser using a properly spherically texture mapped sphere and was able to find some public earth textures I could start with. I eventually combined textures from multiple sources. The important thing is that they are accurate and that the longitude and latitude could be mapped to simple rotations on the rendered globe. There are many choices out there for earth textures. I subdivided the sphere to make sure it looked good up close. Textures I think I got here:

I also experimented with parents on a box to get the correct order of z-scale, z-translation, x-rotation first and then y-rotation next, so I could directly map the longitude and latitude values.

Here is a look at the materials in progress. This one has some transparency on the ocean areas. The main texture is color adjusted with shader nodes — made gray instead of black and white, and inverted for the transparency map:

Step 6. Build blocks on the earth from the data.

In order to build blocks on the earth, each block needs to be created with an origin at the bottom of the box, scaled in height (z scale), placed on the surface of the earth (translated in Z), then rotated through two parent rotations: X rot and then Y rot.

All of this was done using the Python scripting available inside Poser 11 Pro.

Here is the script that inputs the data from json and builds a block for each location. The time series values are read in and the z-scale channel is animated for each block.

Once I create this script in a text file, I opened the Python scripts palette and clicked on an empty button, so I could load the script into the button. The next click on the button would run it. I set the script up to run it again and it would be faster if the objects were already created inside Poser. It takes a while to build the scene the first time (and I tracked down some things that could speed this up for the future.)

Step 7. Retime the animation to slow it down.

At this point I needed a new feature that Poser didn't have. So I added it.

I then loaded some pre-saved camera animation from a camera library entry I created.

Now I needed another Poser python script that could create the text objects for the dates that would need to increment. This was another missing feature in Poser — to be able to create a text prop from Python. It can be done interactively but there was no python function — so I added it! In the 11.3 coming out this week you will find CreateTextProp() on the poser scene object.

This python is a little sloppy and could probably be made simpler but this is what I used to create the numbers:

Then I rendered the sequence overnight.