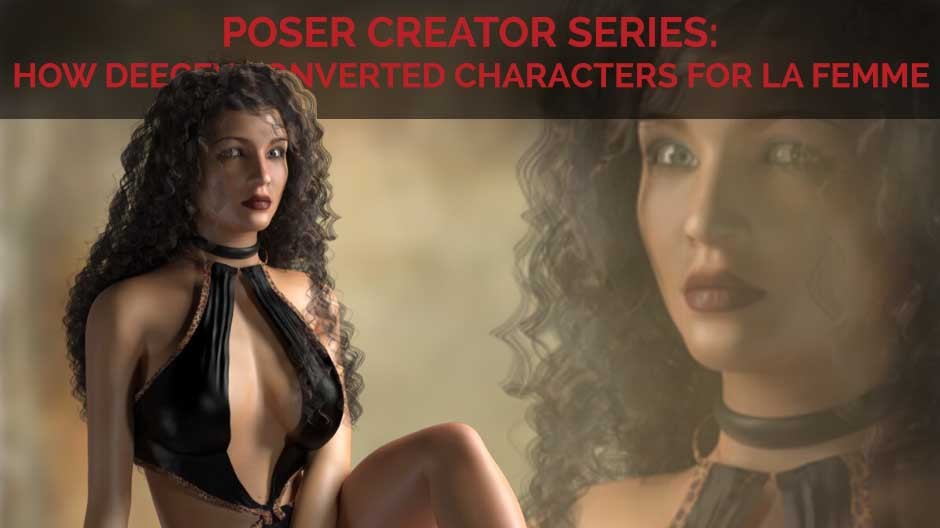 Denise "Deecey" Tyler has worked with Poser since almost the beginning. Over the years, she has worked on many projects and aspects of the software.

Most recently, she was tapped by Renderosity Marketplace Manager Jenn Blake to answer the wishes of many longtime Poser creators and start the process of converting older characters for use with Poser's power couple.

Blake said she asked Tyler to work on the conversion process because of Tyler's history with La Femme. She designed the face morphs and shaders along with providing creative support and advanced testing for La Femme.

Tyler said she and the design group worked together, chatting about ideas and squashing bugs before passing it on to Renderosity for its thorough testing process.

"The end result? The first Poser figure in years that I’ve had fun working on, and working with," Tyler said.

Tyler used that experience, plus her previous work on character setups in Poser's Face Room for Smith Micro, to begin converting select Victoria 4 characters and Genesis characters to La Femme. Once she found that the conversion was possible, she started working on converting Michael 4 characters for L'Homme.

Starting with Tauriel, Catou, Joss and Kath, the characters will be released in batches over the next few weeks.

Tyler took some time from converting characters to answer a few questions about her history with Poser and how she converted the characters.

How long have you been working with Poser?

Deecey: I've been working with Poser since version 1.

What brought you to it?

Deecey: I had lost my job as an engineer due to disc surgery. I lived in Wisconsin at the time, and the state department of vocational rehabilitation got involved to help me set up a home-based business, so I could work at home. I decided that 3D graphics was the way of the future and started learning 3D Studio to learn modeling and animation.

Then I got a piece of mail from Fractal Design about this new software called Poser. I decided to get it and haven't looked back since. LOL

That was a very effective government program.

Deecey: It was a blessing. A real blessing.

What all have you worked on over the years? Please pick your favorites, as I assume there's a lot to choose from.

Deecey: Well, as far as Poser goes, I started by doing textures for other developers. I still love the texturing part to this day. Then I graduated to doing morphs, and then modeling and rigging.

But I have also worked on the Poser manuals, starting with a few chapters for Poser 5, and then the entire manuals from Poser 8 and later.

Poser is kind of my life. ROFL

What was your role with La Femme?

Deecey: For La Femme, I worked on the face morphs, as well as assisting Charles Taylor (Nerd3D) with testing and "sanity checks" when we were working on getting things final for release.

I bet there were plenty of "sanity checks."

Deecey: Ah, yes, there were! La Femme was a huge project, and we all worked very hard on it.

And then you were asked to convert the characters?

Deecey: Jenn Blake, Renderosity's Marketplace manager, had been wanting to find people that could help make a Texture Transformer pack to convert from and to V4 and M4. I guess a couple other people had tried but found it difficult. But because I had done work on Face Room character setups for Smith Micro, I was pretty much familiar with what was involved. So I first started with V4 to La Femme and got it working.

Jenn was elated. That opened the door to doing M4, and Genesis 3 and 8 characters.

Then Jenn piled on a bunch of textures for me to convert. I think I have enough to last me years. LOL

Do you have any tips for advanced Poser users who might want to convert characters?

Deecey: One of the things that has really helped the realism in these characters is that I used ZBrush to hand-paint a skin detail bump map. It has made a huge improvement over textures that were just converted to grayscale.

Deecey: It's generic enough that it can be used in common with all the characters. The only things I need to fix for women are brows. For men, all that body hair is a challenge, and there are so many older maps that still have the hair dark, so the hair goes into the skin rather than out. Oh yes, and "unmentionable" body hair too, that has to be added to the bump maps individually. LOL

So, starting with a really, superb skin detail bump or normal map goes a LONG way in improving the looks of characters.

Once I got the hair fixed, I added that detail stuff with Substance Painter. I can't live without that software.

Is there one character conversion that you're particularly proud of?

Deecey: I do like Catou, and also Jorja. Mi Sun is pretty too. But you'll have to wait and see the characters as they are released.